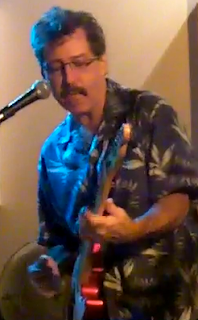 This is the only place the band ever plays! -

Anyway a fair bit of swing and LATIN

The band is called ‘Hallman Swing’!

Please pardon my speech to text which is necessary this time.

On Thursday night I will be playing with a band called MARY JO in the Retros. This is MARY JO MAUR, myself, Cliff Trott on bass. James Trott trumpet, Suzanne Owen saxophone GARY BARRATT drums!   I think you would really enjoy it, honest! There is a lot of talent in that band. Earlier in the day, I am playing in a five piece band in front of Kings in City Hall. The band is called quintessential.  That’s quintessential with a Q. Suffice to say, there are several clarinets flute and saxophone plus a cello. All the reed players double or triple on something else. These are amazing amazing musicians
It’s amazing you know, you have these clowns going around singing Johnny trash music and they're big heroes, meanwhile these reed players have spent years and years and years and years learning their craft play in obscurity.  Anyhow all this is happening Thursday. Thursday noon in front of Kingston City Hall at 12:30 to 130. Then with MARY JO Thursday night in Gananoque at the bandshell 6:30 PM.


UPDATE:
The band and sound was great! - you should have been there!
I will say this. When the town hall construction is done it's going to be beautiful!
There was a heavy rainstorm the night before and the band shell was flooded with nowhere for the water to escape - it was interesting setting up in the dry areas.
Posted by Tim Hallman at 11:27 No comments: