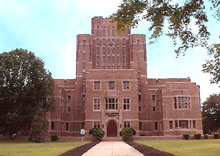 Little decisions made in life, can have rather large effects. In the fall of 1968, the It's Happening Show died, and I was in Waterloo, basically planning my future. I was eager to go to university to study music. However, Canada didn't have semester systems at the time, and I wanted to go 'now', so I went to the Waterloo Public Library to look at books about American universities. I had a friend at USC (Santa Barbara) so I applied there. (He parlayed that degree into a Los Vegas band leader job) I came across a university called Fisk in Nashville Tennessee, and I thought, 'wouldn't it be nice to study music at a university level in Nashville'.  I wrote to them and received an application.  They wanted a picture included - fair enough.  Weeks later I received my replies.  USC - "sorry too late, please apply again".  Strangely, I never heard from Fisk.  I never thought too much of it until years later, I had a friend on a motorcycle trip in the south, and he told me that Fisk was a 'black' university - one of 4 set up immediately after the civil war.  But, of course, it didn't say that in the library book!  I have often wondered - if I had studied classical music at a black university in Nashville, where would I be today? The bio of Fisk...
Posted by Tim Hallman at 11:57 No comments: 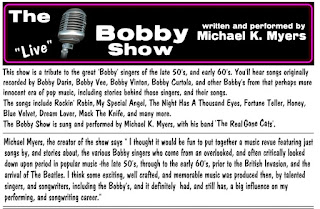 Movie taken by Blair, visiting from Charlottowne!
Several years ago,  Michael Myers and I were thinking of some sort of a show, for theatres,  involving something like 'The Brill Building'  or Neil Sedaka,  or that early 60's music.  Michael thought of the concept of a 'Bobby Show'.  So, it was born, and includes songs by Bobby's...Day, Helms, Rydell, Sherman, Vee, Darin, Goldsboro, Curtola, Vinton, .....and Freeman (if there's an encore). I love the show and love the music.  We perform it as a 4 piece and with Bob Arlidge on bass and Gary Barratt on drums. One of my claims to fame is that I performed one glorious night in the backup band for Bobby Vee.  Looking back now, with the aid of the internet, I realize that Bobby Vee made a little swing into Canada in the autumn of 1966, and, since he hired us, I can only conclude he was 'between bands'. He made us an offer that night to 'take us on the road', and that would have changed my life a bit!   I have pretty well figured out that the last piano player he used before me was Bob Zimmerman, who played with Bobby before he moved to New York and morphed into Bob Dylan. (So my claim to fame is, I replaced Bob Dylan).  You can read about it (Wikipedia)  HERE or Bobby Vee's site, HERE.   A few months ago, using the internet, I contacted Jeff Vee, Bobby's son, and told him about the night in London Ontario, and he said he would pass it on to 'dad'. However it's also on the internet that Bobby was diagnosed in 2011 with Alzheimer's so he likely doesn't remember that 1 night amongst his thousands! The short video included, is the show being performed at Gan Ribfest, July 2011.
For more info, see Michael K. Myers's site.
Posted by Tim Hallman at 11:22 No comments: 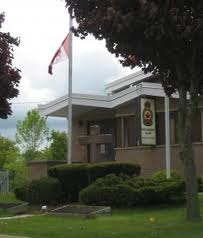 Brockville Legion front entrance
I performed (again) at the Brockville Legion on New Year's day.  It is a large Legion and thus requires many volunteers.  So here's a big cheer for the volunteers that make it happen.
I have played in the past for quite a few of their monthly Birthday parties and Rememberance Day, and I played for the last ever 39 Club of Brockville dance! (this would be an example of the Legion being used by the community)
The Legion has a nice lounge and a large 'dance hall',  with a great dance floor.  So visit their site and 'check em out'!
For you native Brockvillians reading this,  my first ever Brockville job was 1968, at a Sunday night dance, at the Tiki Club. Yikes!