4 talented musicians playing in the lobby.
On the streets of Havana.

Hey world! I'm just back from Cuba, where I experienced an amazing musical world. I could say a lot of things about Cuban life, but I'll leave that to others.
As I understand things, anyone can get a university education in Cuba and lots of talented musicians study music. Again, as I understand it, they are then required to work a government job for 3 years until they're free to do whatever. One government job is, entertaining in a hotel. In the hotel lobby every night was one, then another band or group. They generally play traditional Cuban folk music - always with bass, guitar and percussion.  (One group played things such as My Way and Hotel California) Sometimes there's also sax or flute. I found that usually they all doubled on something. I witnessed a man playing guitar and one night, he sat down and was an amazing piano player! A female lead singer told me she was a French Horn major at university and also plays piano. There was a grand piano in another lobby where a talented, trained pianist would show up every night, and play for 3 hours. (I played for an hour one night, got tips, and left the money sitting. That's a first!) The music they played was not so Cuban - but typical lounge piano music. On a trip to Havana I listened to busker bands in the streets and saw several grand pianos in lobbies. I walked into a museum and heard a piano - clarinet - bass clarinet trio playing for tips. (classical music)
I also had the privilege of seeing the Tropicana Nightclub Show in Havana.  It's just an amazing show - outdoors in the evening, tremendous costumes and LIVE music (is there any other kind?), magicians, balancing acts.... One thing I figured out is that all Carribean resort shows are just cheap imitations of the Tropicana show - it's the real thing.    To get an idea: SEE


On the dark side of things, the classy musicians arrive by bus, go through security, perform, leave through security and get back on their bus with the other hotel workers - off to their homes in 'non tourist' cities. These musicians really have no idea what 'Youtube' is and don't have email addresses. Chances are very good they'll never see my blog when it goes 'viral'.
5 Talented musician gals.
Posted by Tim Hallman at 22:03 No comments:

Gretel the French Horn player...
Gretel told us, she lives in Havana and travels by bus 2 hours every gig night to perform and then 2 hours home. She majored in music in university - on the French Horn , and plays piano too. Our tour guide to Havana was a school English teacher - who did his 3 years, quit and became a tour guide. The salaries for the 2 jobs are about equal, but teachers don't get tipped!  All bands were selling CD's, recorded in Matanzas.  (They knew nothing of iTunes)

The sad state of 'music' in the Dominican Republic. 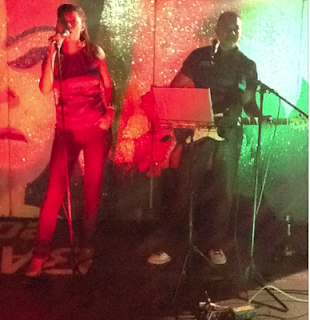 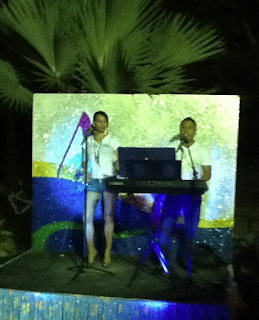 She stares at Laptop while he fakes his piano.

On a recent trip to the DR,  I stayed at a relatively top notch place, and everything about the place was first class - except the entertainment and the 'music'. Now, I know some consider my views rather extremist, but here goes: DJ's don't play music. Apple doesn't sell music. Radio stations don't play music. Musicians play music. There is only live music.There is no dead music.
After the recent lip syncing of what's-her-name at the Super Bowl, and what's-his-name at the Grey Cup, it makes you wonder where the world is headed, 'musically'.
Perhaps 10 years ago, I was walking into a Legion, keyboard under arm,  and a guy opened up his car window and yelled 'You the DJ tonight'?  People have come up to me as I play the piano and tell me I'm a great DJ. I have honestly come to believe that people are so uneducated about music, that they literally don't understand the difference between a DJ and a musician. (btw - I use the term Space Bar, not DJ now, as most of them just 'play'  laptops).
Anyway - I digress - back to the DR. Space Bars are everywhere at the resort - for yoga, weddings, poolside dance instruction, and night time shows. Most, if not all Carribbean resorts use 'animation' teams - young energetic adults who lead you through everything from ping pong to yoga, and this includes stage shows at night. (I am not knocking them, they work very long and hard.) Sometimes these stage shows are games which feature audience members or, they are tribute shows with big costumes and …. lip syncing.  How nice to see the Michael Jackson show with lip syncing.  Meanwhile there is another common form of music at these resorts: a male - female keyboard duo - she sings, he plays and sings. The male runs midi files on the keyboard, while they sing. This year it has sadly digressed. I saw:
I did have one good musical experience. In the restaurant, several nights, were 2, older, male, acoustic guitar player-singers, who circulated and did requests. They were experienced, talented, and wonderful and….playing Dominican music. (plus the ever present Guantanamera) I told the manager "That was the act that should be on the main stage instead of the junk that's up there;. ("Oh gosh, don't say that!")
This whole scene made me wonder a few things. Sitting in a corporate office somewhere, is there an entertainment 'consultant', who distributes the same background trax to all these 'musicians'? They all sound the same and play the same instruments and songs. Is it cheaper to hire a non player than a player? Does the hirer have any idea what he's doing? There must be tons of musicians in the Dominican, and it would be so interesting to hear/see them playing Dominican music, instead of trax of American (and Dominican) songs off a cell phone. Why is the resort so classy and so crappy musically? I'm sure the economy is such that they could hire talented musicians for next to nothing.
I just don't get it. .....stay tuned for Cuba..... 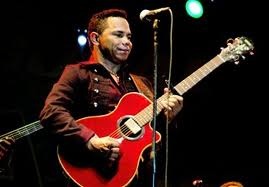